Hello people!! Back at you with a little extra input on the topic of our … lacklustre town – ‘Stirling’.

I do not know any young ‘entrepreneurs’ per say, but I do know some people who are contributing to our town in some significant way, or at least aspire to. And they’ve taken the time to write a little something up for us!!

First up, one of my very own close friends – Dale. We’ve always had long-winded discussions and debates together. Recently, I learned about his relatively new and insanely exciting journey he had embarked on, which I’m sure one day could make a substantial improvement to our town! Here’s what Dale has to say;

“Why do I want to open a business in Stirling?

Let’s cut to the chase here, if it’s a good Indian or a traditional pub meal you’re looking for then Stirling has it but other than that there’s not much of a choice at all – especially late at night. I’m certainly not here to comment on what any other businesses are doing, we just need some god damn variety! I hope to bring exactly that.

The food scene in Stirling is due good shake up. Let’s break the mould of the typical pub meal and try something new, fresh and inviting to the eye with a hip brand behind it to push the idea. My end goal is to open up an establishment with thatidea but first I must gain the experience. I’m currentlystudying Professional Cookery at college and spend my spare time at the house to put what I learn into practice. I also try to put myself out of my comfort zone and try everything and anything when I go abroad.

Restaurants in Stirling are missing – THE EXPERIENCE. I mean this in three different ways: business owners having experience of all sorts of cuisines, the dining experience you have when you’re eating food that has been created and designed in a specific way and finally, knowing that you are eating food created by a business owner that’s passionate about the food and not just the money it will bring. Food is not just food. It has the ability to take you on a rollercoaster of a journey and hurl you right back down in to your seat. That’s what Stirling needs. Not another boring half assed idea that’s most likely to close within the first few months of opening(probably due to rent costs but that’s a story for another day) We need a well-executed, organised food business that’s ready to grab the scene by the ‘cojones’ as Kenny so finely put it.Something that’s different but still close to the heart of what we love the most, great food.

I’m still at the very beginning of my journey and lord knows I’ve got a lot of work ahead of me. I hope in the next few years I’ll have enough experience and knowledge to bring something new, versatile and distinctive to Stirling and blow your taste buds out of your mouth!”

Now, from Roddy! This man, with the ‘Rock and Metal Society’ at Stirling Uni and Dusk Nightclub, have made something happen that I can safely say, is legendary for Stirling. Here’s what Roddy has to say;

“In partnership with Dusk, myself and the rest of the Rock and Metal Society committee are working to bring a regular club night for alternative music to Stirling. The lack of any bar or club providing events for such a large demographic feels like a massive missed opportunity. So far, both events we’ve held have had a great turn out and there’s been nothing but positive feedback so we’re off to a good start! As an extension of this we’re also regularly hosting events with Settle Inn, providing another venue for people who appreciate alternative music to go and enjoy themselves. In the future we can hopefully bring a more vibrant music scene to Stirling and give the town a shot in the arm that it desperately needs.” 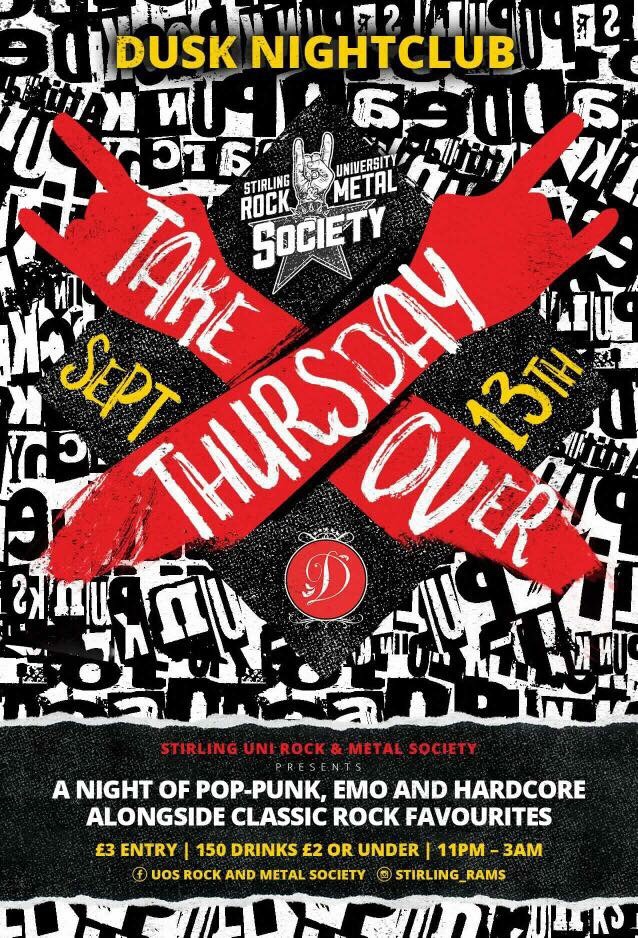 Let’s hope so, Roddy! We’re counting on you guys!

Now, last, but definitely not least! Camy. Many know Camy as the main man and DJ behind ‘Soul Steak’ – which has become one of, if not Stirling’s best alternative for a club night. Here’s what Camy has to say;

“After long philosophical, and highly opinionated chats as a patron on one of Kenny’s barber chairs; he’s decided to give me a platform to speak about one of the things we’ve covered during those long beautification sessions (long because it takes a while to sculpt the perfection that is my fade, obv).

My name is Cameron, I’m 23 years old, and I run parties out of a basement in Stirling. Why is that relevant to you? Because despite the fact that I knew nothing about pursuing a career in dance music, I dove head first into it.

How did I do it? I came up with the idea of making a fake record label, and then I came up with a name for the fake label; “Soul Steak”. I knew my best bet was social media, so I made a Facebook page for the aforementioned fake record label, and made sure it looked super professional. I wanted it to look like a large operation, so I also decided to make up artists who were signed to the label, and even went as far as producing some tracks for them, fake bios for them, etc. I found a local basement, found the local guy who owned a sound system, and with the lies I mentioned before; sold out my first party before the doors even opened.

Why did I just tell you all of that seemingly useless information?, because next year I’m actually going to release my first record on that “fake” record label, and I’ve done it with nothing at my disposal apart from a bit of luck, creativity, and the stones to do it.

My intention for this rant is not to pat myself on the back, but to try and make people realise that myself, and Kenny are managing just fine keeping our talents on home turf, and I’m not even that talented.

This is a call to arms to anyone with an idea; in hopes that you not only pursue it,but apply it in Stirling, and challenge your local community to best you. Better yourself, and those around you with the fruits of your talent.

Thank you Kenny or giving me a platform, and thank you reader for giving me time out of your day.” 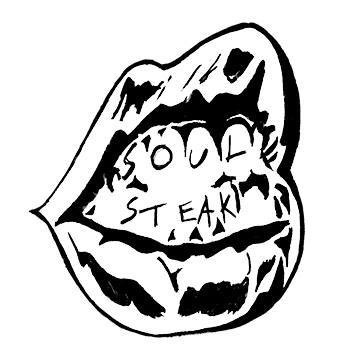 So there sees the end of the ‘Stirling Needs You’ topic for now. Dale has huge plans for his future, and as a close friend, I’m so excited to watch him grow , and surely succeed! Roddy, working alongside the Rock and Metal Society and Dusk, has made a niche thing happen, that most people would be skeptical about. I never had an opportunity to go to such a night when I was young. If I did, it would have been epic. I’m happy to know they’re becoming a regular occurrence! And lastly, Camy, with his baby ‘Soul Steak’, has started with such a small idea, and now has brought Stirling one of, if not the best nights for club music. He has brought the big house music name ‘Marshall Jefferson’ to our small town and played a venue, never before used for such an event – and packed it out!! Alongside another well known Stirling DJ Ryan, AKA – ‘Shapes’. Camy regularly packs out the basement venue ‘Mediterranea’ with soul/funk and disco music.

Many look at others who do such things as people who ‘have something’ they don’t have. We’re all made from the same stuff. If you have an idea that’s good and stand-alone, or at very least, you’re product will be better than the others in you’re industry, then go for it. Give it a try. What do you have to lose? A solid and healthy BRAND and a high quality product is all you need. (More of my thoughts on this in the first entry of our blog ‘The Legacy Begins’). Stirling needs more vibrant, young and inspiring business and entrepreneurs. If that’s you then, Stirling needs you! I have a good feeling it will come, one day!

That’s it for now! Thanks a lot to Dale, Roddy and Camy for taking time to write something up for this topic, much appreciated!!!

View all posts by Kenneth Simpson